The U.S. metal injection molding industry is steady with annual growth rates up to 5 percent, according to a new report from the members of the Metal Injection Molding Association (MIMA) The U.S. MIM parts market in 2017 was estimated at $367–$420 million.

The MIM industry still includes about 25–30 commercial job shops and 15 to 18 captive operations making dental/medical and firearms parts for their own products. The top seven MIM job shops account for more than 50 percent of the commercial market, according to MIMA, which is part of the Metal Powder Industries Federation (MPIF), based in Princeton, New Jersey.

The biggest markets for MIM are firearms and medical sectors, accounting for more than 50 percent of the total market. “On the heels of a peak year in 2016, U.S. firearms manufacturers faced reduced sales in 2017 impacting MIM parts suppliers that are adjusting to a new norm,” according to MIMA.

As in plastic injection molding, automation and improved process control are important trends. Metal Injection Molding (MIM) presses are made by the same major companies, such as Arburg,  that make plastics injection molding presses.

Metal additive manufacturing remains primarily a complement to traditional metal-powder parts forming methods, but is rising from a small base. 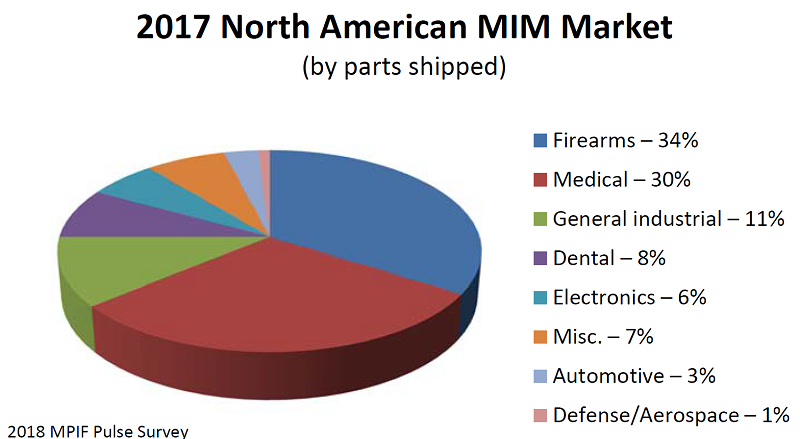