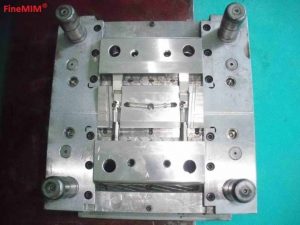 At the beginning, tooling cost is a barrier, especially if the design is not fully worked out. In this regard MIM tends to project an inflexible character. For example, a sophisticated four-cavity mould used in cell phone production costs more than $30,000 each.

Any reworking of that mould to change the design is a cost and time barrier. A few vendors have innovated means to reduce the time and cost for the first mould, including use of polyurethane or aluminium moulds. Curiously, it appears that only half of the moulds created for MIM ever go into production.

Mould cost in MIM tends to be highly variable. In one case, eight vendors quoted prices for the same mould that ranged from $27,000 to $70,000, and delivery times from 8 to 12 weeks. This says that diligence is required to sort out the various claims and determine the best options when ordering tooling.

Since many firms formulate their own feedstock to keep down production costs, a mould customised to that feedstock is not necessarily useable by another firm.

Part costs are dominated by feedstock price. Table is a contrast of component costs between two vendors on the same part, where vendor A uses self-mixing and vendor B relies on purchased premixed feedstock (values are dollars per part). Such a table shows how feedstock cost goes right to the bottom line. Note, that if vendor A adopted continuous processing in debinding and sintering (such as used by vendor B), then the potential component cost would drop to $0.76.

In a sensitivity analysis for MIM part cost, it was determine that feedstock cost was the most important factor. It was followed by component mass, process yield and other production factors. Clearly, designs that remove mass and ensure high process yields lead to the greatest success.

Table Contrast of component costs between two vendors on the same part, where vendor A uses self-mixing and vendor B relies on purchased premixed feedstock (values are US$ per part)